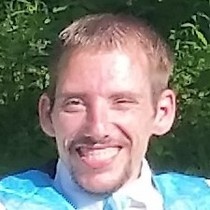 He was born in Salem, Indiana on December 8th, 1982 to Scott Land and Terri (Thacker) Huff.

He was a 2001 graduate of Springs Valley High School, attended Oakland City College and a member of the Red Quarry Christian Church. His senior year, he was the field commander for the Springs Valley Blackhawk Brigade Marching Band. He was employed at the Wal-Mart in Princeton, Indiana.

Aaron is survived by:


FUNERAL CEREMONY
A Funeral Ceremony will be conducted by Darrel Land and Joe Crow on Sunday, June 11th, 2017 at 4:00 p.m. at the Brosmer-Kemple Chapel.  Interment will follow in Mount Lebanon Cemetery in French Lick, Indiana.

VISITATION
Friends may call on Sunday, June 11th, 2017 from 1:00 p.m. until the time of service at the Brosmer-Kemple Chapel.

To order memorial trees or send flowers to the family in memory of Aaron Scott Land II, please visit our flower store.