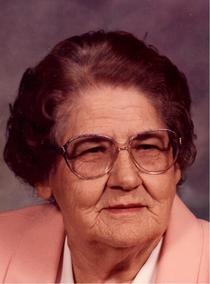 Alma Aleene Lagenour, age 91, of French Lick, Indiana passed away on June 27th, 2015 at her residence.

She married Raymond Lagenour on December 17th, 1942 and he preceded her in death.

Alma was previously employed at the French Lick Sheraton Hotel, at Mount Aire and also at Crane NSWC.

VISITATION
Friends may call Tuesday from 5:00 p.m. - 7:00 p.m. at the Brosmer-Kemple Funeral Home and again on Wednesday from 9:00 a.m. until the time of service.

To order memorial trees or send flowers to the family in memory of Alma Aleene Lagenour, please visit our flower store.