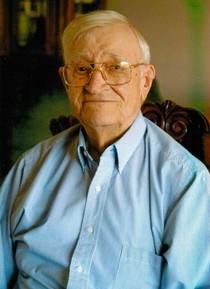 He was born on a farm in French Lick, Indiana on September 4th, 1918 to John and Alice (Gilliatt) Taylor. He was the baby of seven children; Goldie, twins â€“ Fred and Harry, Roy, Claude, Mae and Alva.

Alva met Mary Zoe Kearby at a local country store where people would gather to talk on the weekends. They married in the spring of 1939 in Orleans, Indiana, then settled in Chicago, Illinois where Alva worked at the General Electric Plant on weekdays and bartended at the Casino CafÃ© of Tomorrow on weekends.

Following a yearâ€™s work, he and Mary Zoe returned to French Lick where he and his brother Fred bought a grocery store in Norton, Indiana. During this time, he also took a panel grocery truck around the area selling produce.

Upon being drafted into the United States Navy, he sold the store and bought a house on Adams Street for Mary Zoe. He was assigned to the US Naval Ship the USS Saratoga for two years. While aboard the ship he worked as a Post Master. Alva was stationed in numerous places such as Sydney, Australia and Hawaii, where his ship trained pilots at sea.

Upon his return home from World War II, he and his brother Claude bought two lots in West Baden Springs and built the Taylor Brotherâ€™s Hardware. The two families; Alva and Mary Zoe along with children Timothy and Kay Lynn, Claude and Alice along with children Terry and Jeannie; worked together for approximately 15 years until selling the business to Vernon Crews. During this time, Alva was also a school bus driver for Springs Valley School Corporation.

After selling the hardware business, Alva, Mary Zoe and Timothy started the Woodland Hills Campground near Patoka Lake, where they kept the business for sixteen years before selling it to Frank and Scott Stemle.

Alva loved to grow things, he had two vegetable gardens a year along with a fruit tree grove. He enjoyed talking and joking with people. He was a member of the Lions Club, the French Lick American Legion Post 76 for over 70 years and also a member of the Beechwood Christian Church in French Lick.

Alva is survived by:


In lieu of flowers, contributions may be made in memory of Alva to the Beechwood Christian Church, 8535 West State Road 56, French Lick, Indiana 47432.