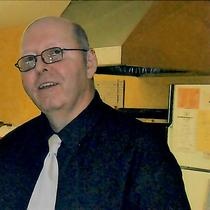 He was born on February 11th, 1958 in West Baden Springs, Indiana to James Emerson and Lily Mae (Baer) Shipman.

Tony graduated from the Springs Valley High School with the Class of 1977, was a member and Deacon of the Cane Creek Christian Church in French Lick, Indiana and retired from Jasper Engines in 2014 after 14 years of service. His favorite pastimes included spending time with family and spending time in the outdoors.


FUNERAL CEREMONY
A Funeral Ceremony will be conducted by Rick Englehardt and Dan Douglas at 2:00 PM on Sunday, November 1st, 2015 at the Brosmer-Kemple Chapel in French Lick, Indiana. Burial will follow in the Patoka Memorial Cemetery.


VISITATION
Friends may call Sunday, November 1st, 2015 from 10:00 a.m. until the time of ceremony at the Brosmer-Kemple Chapel.

To order memorial trees or send flowers to the family in memory of Anthony "Tony" Shipman, please visit our flower store.