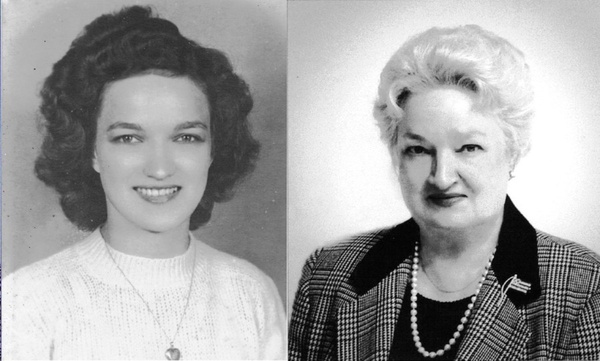 Connie (Andrew) Wright, 93, of Fishers, Indiana, passed away peacefully at her home on Saturday, November 9, 2019. A native of French Lick, Indiana, she was born Constance Anna on November 4, 1926, on Sulphur Creek Ridge to William J. and Grace B. Andrew. Her siblings Cora Hendrix (Ruble), Ross Andrew (Marjorie), and Grace Toliver preceded her in death; her brother Joe Andrew resides in Phoenix, Arizona. Connie married William (Billy D.) Wright in 1947. The couple had three children, C. Thomas Wright, Fishers, Indiana; W. Timothy Wright, Carmel, Indiana, and C. Rebecca (Wright) Noot, of Indianapolis. A 1945 graduate of French Lick High School, Connie had long since retired, but her work experience included serving as a nurse for Dr. John Spears in Paoli, office worker for Alpha Kappa Psi national headquarters in Indianapolis, and cashier in the gift shop at the Marriott Hotel on Indianapolis’s east side. A longtime member of East 91st Street Christian Church in Indianapolis, she was previously a member of Woodland Springs Christian Church in Carmel and of East 38th Street Christian Church in Indianapolis; she was a dedicated member of the churches’ choirs. Having grown up playing the piano and singing in her community with her sister Cora, she had become the matriarch of a very musical family; her sons’ careers have included more than four decades with the Wright Brothers band, and her daughter is retired after more than 35 years as a music teacher. Connie is survived by her children, Tom (Christy), Tim (Dianne), and Rebecca (Peter), six grandchildren, and 11 great-grandchildren. Arrangements were handled by Brosmer-Kemple Funeral Home in French Lick, and interment was at the cemetery at Sulphur Creek Church on Sunday, November 10, where the family conducted a graveside service, singing some of Connie’s favorite hymns and reading her requested Bible passage, Lamentations 3: 22–23: “Because of the Lord’s great love we are not consumed, for his compassions fail not. They are new every morning; great is thy faithfulness.” She leaves her loving family a rich and powerful legacy of constant strength, beautiful music, and fervent faith.

To order memorial trees or send flowers to the family in memory of Connie Wright, please visit our flower store.