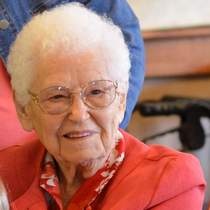 She was born in Washington County, Indiana on May 1st, 1916 to Atha Kelly and Rachel Catherine (Durnil) Kelly.

She worked at the Paoli Chair Factory in Paoli, Indiana.

Cora is survived by:


FUNERAL CEREMONY
A Funeral Ceremony will be conducted by Pastor Henry Beatty and Pastor Gene Helms at 11:00 a.m. on Tuesday, October 4th, 2016 at the Brosmer-Kemple Chapel. A Graveside Service will follow at 1:00 p.m. at the Kays Chapel Cemetery in Hardinsburg, Indiana.

To order memorial trees or send flowers to the family in memory of Cora Marie Deich, please visit our flower store.

"The Church" at Powell Valley