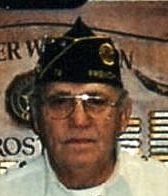 He was born in Terre Haute, Indiana on September 18th, 1942 to Joe and Annamae (Flora) Merritt.

Danny graduated from Gerstmeyer High School in Terre Haute, Indiana with the Class of 1960. After high school he joined the United States Navy and served aboard the ship USS Kaskaskia. He served his country during the Bay of Pigs and also during the Cuban Missile Crisis. At the age of 21, Danny went to work for Chrysler Motors as a Cutter/Grinder in their Indiana plants and was a loyal employee for 30 years, retiring from the Kokomo, Indiana plant. He was a member of the UAW Local 685 out of Kokomo, Indiana. He attended Arsenal Technical Evening School where he received training and certification for plumbing, pipefitting, blue print and drawing, refrigeration, air conditioning, hydraulics and welding.

Danny loved his family and his country. He was a lifetime member of the Paoli VFW Post 8302 and of the French Lick American Legion Post 76. He dedicated the last 10 years of his life to honoring his fellow veterans on the American Legion Honor Guard Firing Squad.

He attended the Beechwood Christian Church in French Lick, Indiana. Danny was a wonderful and loving husband, father and grandfather. He loved fishing, hunting, playing poker, gardening, canning, Nascar and spending time with his family. Danny and Sharon would have celebrated the 50th  Anniversary in January of 2016.

FUNERAL CEREMONY
A Funeral Ceremony will be conducted Wednesday, September 16th, 2015, at 2:00 p.m. by Joan Daniels at the T.L. Pinnick Chapel with cremation to follow. A private burial ceremony will be performed at a later date.

To order memorial trees or send flowers to the family in memory of Danny Joe Merritt, please visit our flower store.