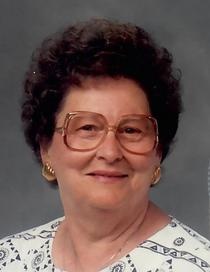 Darlene (Hovis) Eastridge, age 87, of French Lick, Indiana entered into eternal rest with family by her side on May 22nd, 2016 at Brookside Village in Jasper, Indiana.

Darlene was a member of the Eastern Star, Red Hats and Phi Beta Psi. She had previously worked at Crane and also as an Operator for the French Lick Sheraton Hotel.

Darlene is survived by:


FUNERAL CEREMONY
The Funeral Ceremony will be conducted on Wednesday, May 25th, 2016 at 1:00 p.m. by Pastor Mike Grable at the Brosmer-Kemple Chapel. Burial will follow in the Mount Lebanon Cemetery in French Lick, Indiana.

VISITATION
Friends may call on Wednesday, May 25th, 2016 at the Brosmer-Kemple Chapel from 10:00 a.m. until the time of service.

The family requests that memorial contributions be made to the Mount Lebanon Cemetery Fund, 9711 West State Road 56, French Lick, Indiana 47432.

To order memorial trees or send flowers to the family in memory of Darlene Eastridge, please visit our flower store.