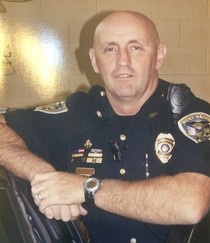 Dave Atchison, 56, of Orleans, Indiana entered into eternal rest on January 11th, 2018 surrounded by family and friends at his residence.

He was born on July 17th, 1961 in Bedford, Indiana to Eugene Atchison and Alma â€œMeltonâ€ Owens.

Dave married Donna Roach on May 4th, 2001 and she survives.

He was preceded in death by (2) Brothers â€“ Gary and Robert.

Dave was not afraid to work and through the years was employed with the Bedford Parks Department, Orange County Sheriffâ€™s Department as Jail Commander and Road Deputy, the French Lick Springs Hotel in Surveillance and the West Baden Police Department, where his most recent position was Chief of Police. He was a former member of the Blue Knights, Legion Riders and an avid motorcycle rider.

He was part of the Scuba Team, was a guest instructor at ILEA for Defense Tactics and a certified instructor for Taser and Defense Tactics. He trained with the Evansville Police Department SWAT Team to assist in perfecting his skills as an Active Shooter Instructor.

Dave has been practicing Mixed Martial Arts for over 30 years and established Atchison Martial Arts in Orleans, where he taught and mentored both students and at-risk youth on discipline and leadership.  He always had high expectations for his students and even higher of his children.

Dave is survived by:

CELEBRATION OF LIFE
A Celebration of Life Ceremony will be conducted by Kirby Stailey at 11:00 a.m. on Saturday, January 20th, 2018 at Unity Hall (Orleans Christian Church) in Orleans, Indiana.

In lieu of flowers, please donate to Atchison Martial Arts for existing and continuing costs in memory of Daveâ€™s legacy as a teacher of discipline and leadership to the youth of his community, as well as the at-risk youth of the community. Donations can be sent to:
Atchison Martial Arts, 360 North Second Street, Orleans, IN 47452.

To order memorial trees or send flowers to the family in memory of Dave B. Atchison, please visit our flower store.