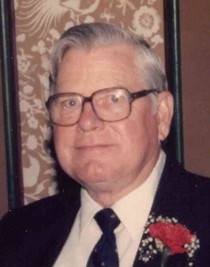 He was born in Orange County, Indiana on July 20th, 1925 to Albert Nelson and Virginia â€œPurkhiserâ€ Nelson.

Dennis married Violet Irene Jones who preceded him in death on September 5th, 1979 and then married Grace Evelyn Harrison Kearby and she survives.

He was also preceded in death by his parents, (2) brothers â€“ Murl and Eugene Nelson and (2) sisters â€“ Juanita Pendley and Geneva Roach.

Dennis was a second-generation minister, ordained with the Wesleyan Tabernacle Association. While in ministry, he pastored first at Nicholson Valley Church, then at Crystal Community Church and last at Highland Chapel Church in West Baden Springs, Indiana. Dennis was also a farmer, worked in contracting, started Nelsonâ€™s Masonry and owned Twin City Lumber with his sons Gerald and Tim Nelson in French Lick.

Dennis was very proud of the time he spent serving his country in WWII and loved to tell stories.  He was a Corpsman in the United States Navy and one of the first soldiers to land on Sasebo, Japan after the allied victory. Dennis was a member of the West Baden American Legion Post #149 and attended the West Baden Springs High School before enlisting in the Navy.

Dennis is survived by:

To order memorial trees or send flowers to the family in memory of Dennis Nelson, please visit our flower store.