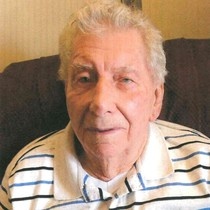 He was born in Martin County, Indiana on July 25th, 1918 to Everett G. Archer and Zelda E. â€œCooperâ€ Archer.

Everett married Magaleen Kellams on August 7th, 1940 and she preceded him in death on January 12th, 2014.

He was also preceded in death by his parents and (1) sister â€“ Carelean Klepheke.

Everett graduated from the West Baden Springs High School Class of 1937. After high school, he went to work for Ford Motor Company in Louisville, Kentucky.  After working for a time at Ford Motor Company, Everett attended the State Police Academy and upon completion, was assigned as a Perimeter Guard at the Charlestown Powder Plant in Charlestown, Indiana.

During his service in the United States Navy, Everett was stationed in Key West, Florida where he served as Shore Patrol Officer.

After being honorably discharged from the United States Navy, Everett returned to West Baden Springs where he started Archer Paint and Body Shop, which he owned and operated for over 30 years.

He loved to hunt and fish. Everett became a NRA Certified Small Arms Instructor and instructed many people of all ages on safe and accurate handling of firearms. He sponsored the local Boy Scout Explorer Scout Troop for many years where he used his NRA Small Arms Instructor to teach the youth about firearm safety.

Everett had a lifelong love of art which was evident by him spending 34 years showing his art, through his business named Brass Crafts, in juried arts and craft shows including the Madison Chatauqua, Saint James Court Days and Parke County Covered Bridge Festival.

VISITATION
Friends may call Thursday, May 18th, 2017 from 11:00 a.m. until the time of service at the Brosmer-Kemple Chapel.

To order memorial trees or send flowers to the family in memory of Everett Pershing Archer, please visit our flower store.