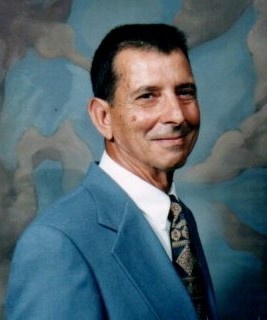 Franklin Charles Stemle, 87, entered into eternal rest on May 7, 2021,at Palm Garden Health and Rehabilitation Center in Clearwater, FL.

Frank married Sherry Corbett on July 26, 1957, and she survives.  Frank and Sherry had three children, Steve, Cara, and Scott.

Frank grew up in New Albany, Indiana and was a graduate of New Albany High School.  He had a love for basketball and was part of a very talented New Albany Bulldog team. His nickname was “Hound Dog”. He then attended Indiana University to earn his teaching and administration degree.  He also played basketball for IU as a freshman when they won the NCAA tournament that year.

Frank taught at Elizabeth High School and coached basketball for two years right out of college.  He was then drafted into the Army and served for two years, mostly in Germany.  He then returned to Elizabeth and taught and coached for two more years there at the newly consolidated South Central High School.  He left South Central in 1963 and took a job teaching Social Studies at Springs Valley High School. He taught for four years then accepted the job as principal.  He remained principal at Springs Valley until he retired after 25 years in 1992.

Frank and Sherry moved to French Lick in 1963 and raised their family there. They were active members of Our Lady of the Springs Catholic Church.  Frank enjoyed fishing, traveling, visiting family, bird watching, mushroom hunting, and nature.  Even after retirement, he continued to watch as many Springs Valley football and basketball games as he could.  He was always proud of his school!  Frank and Sherry remained in French Lick until they moved to an assisted living facility in Clearwater, FL, near Cara at the end of 2018.

Frank is survived by his wife of 63 years, Sherry, of Clearwater, FL
his son, Steve (Laura) of Lake Worth, FL,
his daughter, Cara (Dan) of Palm Harbor, FL,
and his daughter-in-law, Tiffani of French Lick.

He is also survived by many grandchildren:
Sara, Michael (Chenelle), and Luke (Steve and Laura)
Kelsey, Thomas and Annastasia (Cara and Dan)
Elizabeth, Gabrielle, Isaac and his two sons, Weston and Memphis (Scott and Tiffani).

A Catholic funeral mass is being held on May 31st at 11:00 a.m. at St. Ignatius of Antioch Catholic Church in Tarpon Springs, FL.  Frank is being cremated and burial will be at a later time.

An online memorial tribute to Frank can be reached at www.frankstemletribute.net

To order memorial trees or send flowers to the family in memory of Franklin Charles Stemle, please visit our flower store.