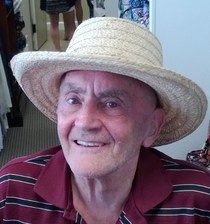 He was born in Orange County, Indiana on August 28th, 1937 to Thomas Crowder and Maude (Drake) Crowder.

He married Geraldine Fox and she preceded him in death on May 10th, 2012.

George was also preceded in death by his parents and (2) brothers â€“ Joseph and Noral Crowder.

He was a member of the South Liberty Church of Christ and retired from Kimball International. George was a Veteran and served his country in the United States Army.


FUNERAL CEREMONY
A Funeral Ceremony will be conducted by David Galloway at 3:00 p.m. on Saturday, June 18th, 2016 at the T.L. Pinnick Chapel in French Lick, Indiana. Burial will follow in Cane Creek Cemetery.

In lieu of flowers, the family requests memorial contributions be made to the Cane Creek Cemetery Fund.

To order memorial trees or send flowers to the family in memory of George Crowder, please visit our flower store.