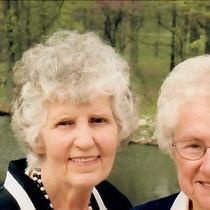 Gladys worked at the West Baden College for 8 years.

She was a member of 1st Baptist Church in Hammond, Indiana.

FUNERAL CEREMONY
Funeral Ceremony will be conducted by Bro. Jack Wilson on Friday September 11th, 2015 at 2:00 P.M. at the Brosmer Kemple Funeral Home.  Burial will follow in Highland Chapel Cemetery.

VISITATION
Friends may call Thursday September 10th, 2015 from 4:00 p.m. to 8:00 p.m. at Brosmer-Kemple Funeral Home, and from noon on Friday until time of service.

To order memorial trees or send flowers to the family in memory of Gladys Hall, please visit our flower store.