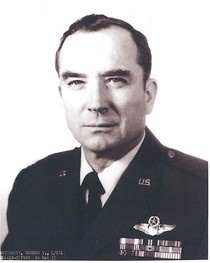 He was born in Orange County, Indiana on February 1st, 1930 to John M. and Mabel (Wininger) Daugherty.

He was also preceded in death by his parents and (1) Brother â€“ Marvin Daugherty.

He remarried on September 6th, 2001 to Patty Lane and she survives.

Vance graduated from French Lick High School with the Class of 1948. After high school, he attended Franklin College until he was called to serve his country with the United States Air Force in January of 1950. While at Franklin, he was a member of the Phi Delta Theta and was also on the basketball team.

While in the United States Air Force, Vance completed pilot training and flew fighter jets during the Korean War and Vietnam War. He attained the top pilot rating of Command Pilot and was awarded several medals for his performance that included the Bronze Star Medal. Vance served in several different countries and worked four years in the Pentagon. Vance retired from the United States Air Force after 30 years of service at the rank of Lt Col.

He belonged to the Daedalian Pilots Association, Air Force Association, American Legion, Veterans of Foreign Wars and the National Management Association. Vance was a former member of the Red Quarry Christian Church and was the Trustee of the Newburgh Presbyterian Church.

FUNERAL CEREMONY
Funeral ceremony will be conducted by Pastor Kathleen Sox on Thursday, May 12th, 2016 at 11:00 a.m. at the Brosmer-Kemple Chapel in French Lick, Indiana. Interment will follow in the Emmons Ridge Cemetery in Hillham, Indiana. Military Graveside Rites will be performed by Scott Air Force Base.

To order memorial trees or send flowers to the family in memory of Gordon Vance Daugherty, please visit our flower store.