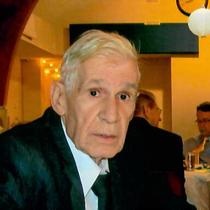 He was born in Orange County, Indiana on March 21st, 1931 to Charles Audie and Della (Morris) Wininger.

As a young boy, Gordon caddied on the Hill Course and talked about watching Joe Lewis playing golf while he was caddying.

Gordon worked at Travelers Inc. in Orleans, Indiana where he was a finish room supervisor and also a draftsman. After Travelers closed, he then began working at Kimball Piano in West Baden Springs as a draftsman and engineer. After Kimball, he then went to work at WF Meyers in Bedford, Indiana where he worked as a machinist operating several machines including the internal grinder. He retired from WF Meyers after 20 years and enjoyed the rest of his life in retirement.

He was a faithful member of the Red Quarry Christian Church where he served as deacon and trustee for several years. He was also song leader until his health would no longer allow. Gordon was a wonderful father and grandfather who loved the Lord whom he now will live with eternally in Heaven.

VISITATION
Friends may call Tuesday, October 25th, 2016 from 10:00 a.m. until the time of service at the Red Quarry Christian Church.

To order memorial trees or send flowers to the family in memory of Gordon Wininger, please visit our flower store.