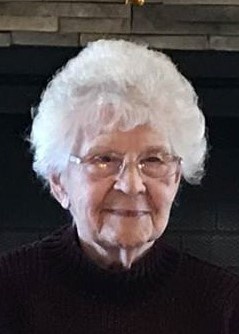 She was born in Posey County, Indiana on January 6th, 1911 to John Dickhaut and Mary (Wulf) Dickhaut.

Helen was a member of the Springs Valley United Methodist Church since her moving to French Lick in 1938 where she was the organist, choir director and leader in the United Methodist Women at the local and district level. She was also a member of Tri-Kappa, Order of the Eastern Star and was very involved in multiple types of charity work such as: making bedrolls for the homeless, made band uniforms and flags for the Springs Valley Band, volunteering for the food pantry, making outfits for Haiti Orphans, and making baby blankets for hospitals.

After graduating from Mount Vernon High School in 1928, she then went on to get her bachelors degree from Indiana State University and Indiana University where she obtained her masters degree. She was the Band Director at Orleans High School for 1 year in 1957. She retired from teaching in 1977 from the Springs Valley School Corporation where she taught Language Arts, was the Junior High Band Director and the High School Chorus Director. She was honored with the Older Hoosier of the Year Award in 2003, United Methodist Church Bread and Basin Award in June of 2010, the Golden Deeds Award in 2003, the Springs Valley Hall of Fame in 2014 and lastly, the Indiana Bicentennial Torch Relay in 2016.

FUNERAL CEREMONY
The Funeral Ceremony will be conducted by Rev. Doug Finney and Rev. Dennis Adams at 2:00 p.m. on Sunday, September 29th, 2019 at the Brosmer-Kemple Funeral Home in French Lick, Indiana.  Burial will follow in Ames Chapel Cemetery in Paoli, Indiana.

The family requests memorial donations be made In Loving Memory of Helen to either the United Methodist Children’s Home, 515 West Camp Street, Lebanon, Indiana 46052 or to Heifer International, P.O. Box 8058, Little Rock, Arkansas 72203.

To order memorial trees or send flowers to the family in memory of Helen L. Aylsworth, please visit our flower store.