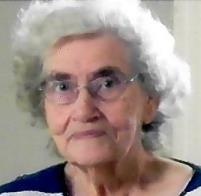 She was born in Dubois County, Indiana on September 27th, 1929 to Frank and Charlotte (Cox) Thompson.

She was also preceded in death by her parents and (2) two sisters.

Hollace was a member of the Red Quarry Christian Church in French Lick, Indiana.

She was a homemaker.


FUNERAL CEREMONY
The funeral ceremony will be conducted Wednesday, November 18th, 2015 at 2:00 p.m. by Darrel Land and David Moss at the Brosmer-Kemple Chapel in French Lick, Indiana. Burial will follow at the Ames Chapel Cemetery in Paoli, Indiana.

To order memorial trees or send flowers to the family in memory of Hollace E. Roach, please visit our flower store.