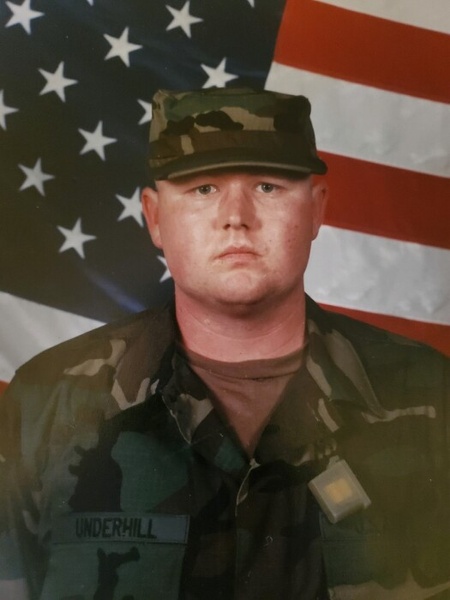 Kelly Underhill, 44, of French Lick, Indiana entered into eternal rest on July 17th, 2021. He was born in Salem, Indiana on July 5th, 1977 to Kenny Ray and Carolyn (Purkhiser) Underhill. Kelly was preceded in death by his Father; (1) Sister – Suzanne Andry; and (1) Brother – John Paul Underhill. He was a 1996 graduate of Springs Valley High School and served in the United States Army where he was deployed to Operation Iraqi Freedom in Iraq and Afghanistan. Kelly is survived by: Mother Carolyn Underhill of French Lick, Indiana (1) Brother Chris Underhill of Seymour, Indiana Sister-in-Law Amy Underhill of Freetown, Indiana Uncles, Aunts, Cousins, Nieces and Nephews also survive. FUNERAL CEREMONY A Funeral Ceremony will be conducted by Pastor Nate Daniels on Monday, July 19th, 2021 at 1:00 p.m. at Brosmer-Kemple Funeral Home, French Lick, Indiana.  Burial will follow at Mount Lebanon Cemetery, French Lick, Indiana. VISITATION  Visitation for friends and family will be Monday, July 19th, 2021 from 10:00 until the time of service at the funeral home. In lieu of flowers, the family requests that memorial contributions be made to Mount Lebanon Cemetery Fund, c/o Wayne Ferguson, 9711 West State Rd 56, French Lick, IN 47432. Arrangements are in the care of Brosmer-Kemple Funeral Homes, 9640 W. State Road 56, French Lick, Indiana 47432. Condolences may be made on our Facebook page at Brosmer-Kemple Funeral Home or at our website – www.brosmer-kemplefuneralhome.com.
To order memorial trees or send flowers to the family in memory of Kelly Underhill, please visit our flower store.