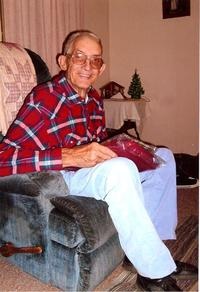 He was born on September 27th, 1927 in Bath County, Kentucky to Hiram and Nora Katherine â€œMossonâ€ Roach.

He married Hollace Thompson on July 20th, 1952 and she survives.

Louie was a member of the Red Quarry Christian Church in French Lick, Indiana.

He was an Army Veteran of World War II and worked at Crane NSWC where he retired from in 1984.

Burial will follow at the Ames Chapel Cemetery in Paoli, Indiana.

In lieu of flowers, the family request memorial donations be made to the Alzheimer's Association National Office, 225 N. Michigan Ave., Fl. 17, Chicago, IL 60601

To order memorial trees or send flowers to the family in memory of Louie Edward Roach, please visit our flower store.