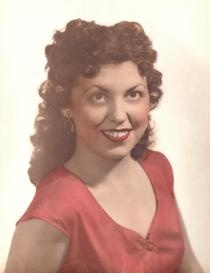 She was born in Dubois County, Indiana on September 22nd, 1933 to Roy Noble Sr. and Ethiel (Thacker) Noble.

She was also preceded in death by her parents and (3) Brothers â€“ Roy Jr., Charles â€œBillâ€ and Kenneth Noble.

Lula was a member of the Peopleâ€™s Tabernacle Church in French Lick. She had previously worked at Kimball Electronics tuning pianos and also in the laundry department and the French Lick Springs Hotel.

CELEBRATION OF LIFE CEREMONY
A Celebration of Life Ceremony will be conducted by Bro. Randy Stevens at 5:00 p.m. on Tuesday, August 2nd, 2016 at the T.L. Pinnick Chapel with cremation to follow. The burial will be held at a later date in the Crystal Community Cemetery.

In lieu of flowers, the family requests memorial contributions be made to the Crystal Community Cemetery Fund.

To order memorial trees or send flowers to the family in memory of Lula Mae Myers, please visit our flower store.