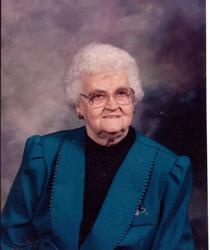 Margaret was born on June 11th, 1922 in Martin County (near Rusk), Indiana to Noah Kerns and Ollie â€œJonesâ€ Kerns. She also had a twin sister Blume.

June and Kenneth enjoyed their farming and Angus cattle. June loved working in her garden, flowers and sewing. They were 4-H leaders for many years.

Her door was always open and she enjoyed all the activities and fellowship with family and friends.

Margaret is survived by:

A host of relatives and friends also survive Margaret.

Friends may call from 3:00 PM until 7:00 PM Sunday, March 23rd, 2014 at the Brosmer-Kemple Funeral Home in French Lick, Indiana. The Funeral Service will be conducted at 10:30 AM on Monday, March 24th, 2014 at â€œThe Churchâ€ at Powell Valley located near the intersection of Powell Valley Road and Anderson Road in Shoals, Indiana. Friends may call on Monday from 9:30 AM until the time of service at the church.

Burial will be at Spring Hill Cemetery in Shoals, Indiana.

To order memorial trees or send flowers to the family in memory of Margaret June Hendrix, please visit our flower store.

"The Church" at Powell Valley