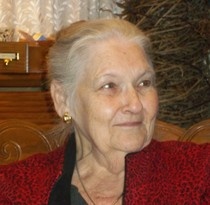 She was born in Orange County, Indiana on May 22nd, 1930 to Thomas David Morgan and Mae (Seybold) Morgan.

Patsy married Harry Grant â€œFuzzâ€ Qualkenbush on October 31st, 1948 and he preceded her in death on September 1st, 1987.

Patsy worked at the French Lick Hotel as a masseuse, cashier and worked at the golf course. She graduated from the West Baden Springs High School with the Class of 1948. She was a member of the West Baden Springs First Baptist Church. Patsy enjoyed quilting, sewing and spending time with her children and grandchildren. She will be greatly missed by all her loving family and friends.

Cremation was chosen and a private graveside service will be held at a later date.

If anyone would like to make memorial contributions, the family wishes them to be made to the Springs Valley Meadows Activities Fund, 457 South State Road 145, French Lick, Indiana 47432.

To order memorial trees or send flowers to the family in memory of Martha Patsy Qualkenbush, please visit our flower store.