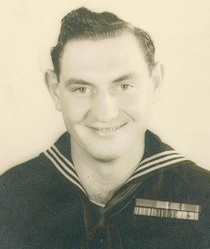 Melchior G. (Mac) Kalb, 92 of Shoals, Indiana passed away on Thursday, April 2nd, 2015 at his Lost River Township home. He was born on February 26, 1923 in Martin County, Indiana to the late Conrad and Isabel (Simmons) Kalb.

He was preceded in death by (2) Brothers - Roger Keith and Marvin Kalb, (2) Sisters - Elaine Stetler and Iris (Eugene) Brown.

He was a U.S. Navy veteran of WWII, serving on the USS Cowanesque.


He was a lifelong farmer, former Lost River trustee, and served as President of the Shoals School Board.  He was also a former Grange and American Legion member. He enjoyed playing cards, fishing and mushroom hunting.

(3) Stepsons Gary, Jeff and Terry Sherman of Dubois County, IN

Visitation will be from 11:00 AM â€“ 1:00 PM on Monday, April 6th, 2015 at the Brosmer-Kemple Funeral Home. A graveside service will follow at the Cuzco Cemetery in Cuzco, Indiana.

Burial will be in the Cuzco Cemetery in Cuzco, Indiana.

To order memorial trees or send flowers to the family in memory of Melchior G Kalb, please visit our flower store.