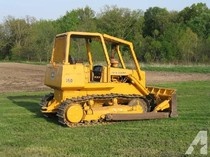 Ralph was preceded in death by his parents and (1) Sister â€“ Dorothy Elmore.

Ralph graduated from French Lick High School with the Class of 1947. After high school, he joined the United States Army where he served his country proudly for 4 years. After being honorably discharged from the United States Army, Ralph began his career in the construction/excavation field.

His first job was with Milar Walls Sandstone Company in French Lick, Indiana. In 1966, while still working at the Sandstone Company, Ralph started his own construction company, Ralph E. Collins Excavating. In 1971 Ralph left the sandstone company and went to work for Reynolds Inc where he worked until 1980. After leaving Reynolds, Ralph returned to his own construction company, R.E. Collins and Sons Construction where he worked until his retirement. He built numerous ponds throughout his career and mainly enjoyed operating his dozer and excavator.


Cremation was chosen and a private Celebration of Life Ceremony will be held at a later date.

To order memorial trees or send flowers to the family in memory of Ralph E. Collins, please visit our flower store.