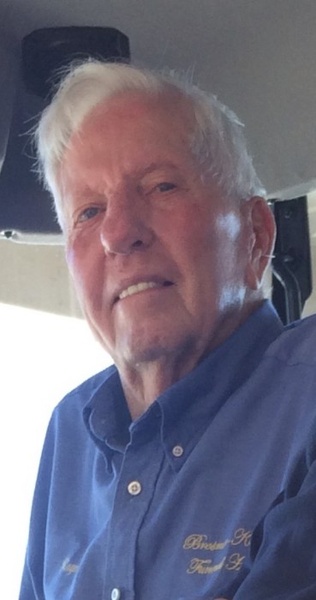 He was born in Orange County, Indiana on January 5th, 1927 to Simon E. and Myrtle (Clements) Brosmer.

Raymond married Norma Koontz on June 7th, 1952 and she survives.

Raymond graduated from the West Baden Springs High School with the Class of 1945. He served his country proudly during World War II in the United States Army from 1945 – 1947 with the occupation of Germany.

After returning from the war, Raymond attended the Kentucky School of Embalming where he graduated with an embalmer’s and funeral director’s license with the Class of 1951. He then returned to his hometown where he worked for Ben and Fern Schmutzler until Ben passed away. Then Raymond, with his wife Norma, and Ben Drabing, and his wife Darlene, continued to operate the Schmutzler Funeral Home for several years, later changing the name to the Brosmer-Drabing Funeral Home. After a few years of being semi-retired, he came out of retirement to work alongside his daughter Karen and grandson Aaron at Brosmer-Kemple Funeral Home. His work ethic continued well into his 80’s until his health would no longer allow him to be in everyday operations but he was still always around as much as his health would allow to greet everyone with a smile and have a conversation.

Raymond loved playing golf and flying airplanes, until his health would no longer allow, watching baseball on TV but most of all spending quality time with his family and friends.

He is also survived by several nieces and nephews.

To order memorial trees or send flowers to the family in memory of Raymond C. Brosmer, please visit our flower store.