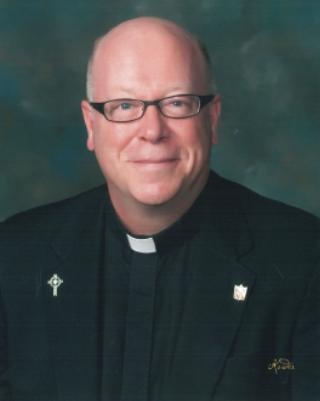 Rev. John Peter Gallagher, a native of Shelbyville, passed to eternal life on February 6 in the rectory of Our Lady of the Springs Parish in French Lick, Ind., where he had served as pastor since 2018.

Visitation will take place from 4-8 p.m. on Feb. 21 and from 9-11 a.m. on Feb. 22 at St. Joseph Church. On February 21, the reception of the body will take place at 4 p.m. and a vigil service will be prayed at 7 p.m. Masks and social distancing will be required for the visitation and Mass of Christian Burial.

Father Peter was born on January 23, 1961 in Shelbyville to the late David and Elizabeth (Moore) Gallagher. He and his family later lived for periods in Iowa, Minnesota and South Dakota before returning to Shelbyville. Father Peter graduated from Shelbyville High School in 1979.

From his time as a child, he had felt a call to serve God and the Catholic Church in which he was raised as a priest. So, after high school, he became a seminarian for the Archdiocese of Indianapolis and received formation at the former Saint Meinrad College in St. Meinrad, Ind., graduating from there in 1983.

At that time, Father Peter discerned a possible call to be a Benedictine monk at Saint Meinrad Archabbey in St. Meinrad. He entered the novitiate there in 1983 and professed vows for a three-year period in 1984. After living out those vows, Father Peter left the archabbey and moved to California.

For two years, he taught a diverse student body at the former Daniel Murphy High School, an all-boys Catholic school in the poverty-stricken south-central neighborhood of Los Angeles.

During that time, Father Peter felt God’s call to the priesthood again and became a seminarian for the Archdiocese of Los Angeles, earning a master of divinity degree at St. John Seminary in Camarillo, Calif. In the final year of his formation, however, he became a seminarian again for the Archdiocese of Indianapolis and was ordained a priest on June 6, 1992 in SS. Peter and Paul Cathedral in Indianapolis.

In his 28 years of priestly life and ministry in central and southern Indiana, Father Peter served in a wide variety of settings: from urban high schools and parishes, to faith communities in suburbs, small towns and rural areas.

For several years, Father Peter was also the chaplain for the Indianapolis Colts National Football League team, including when it won the Super Bowl in 2007.

In his last two years of ministry, Father Peter served as pastor of Our Lady of the Springs Parish in French Lick and Our Lord Jesus Christ the King Parish in Paoli, Ind.

He died doing what he had felt God had called him to do from an early age: serving his people, leading them in worship and service and helping them grow in faith.

He was preceded in death by his parents and his brother Brian Gallagher.

Memorial contributions may be sent to Catholic Charities of the Archdiocese of Indianapolis, 1400 N. Meridian St., Indianapolis, IN 46202.

To order memorial trees or send flowers to the family in memory of Rev. John Peter Gallagher, please visit our flower store.