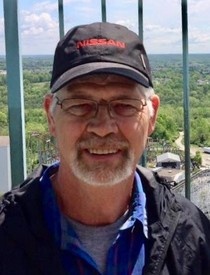 He was born on December 20th, 1956 in San Antonio, Texas to Orville and Rosemary (Harrison) Stone.

Richard married Bonnie Carnes on May 25th, 1979 and she survives.

Richard was a 1975 graduate of Northeast Dubois High School and a member of Redemption Christian Church in Jasper, Indiana.

He was employed at Kimball International as a driver for over 40 years and still loved his job and enjoyed going to work every day.

Richard enjoyed the outdoors where he and Bonnie spent time kayaking, hiking, biking and walking.  One of their favorite things to do when traveling was Point of Interest brown signing.

The greatest enjoyment for him was spending time with his girls and being a papaw to his grandkids.

Richard is survived by:

In lieu of flowers, contributions in memory of Richard can be made to the â€œWhite Envelope Fundâ€ c/o Bonnie Stone,
8832 N. Hillham Road South, French Lick, IN 47432

To order memorial trees or send flowers to the family in memory of Richard E. Stone, please visit our flower store.