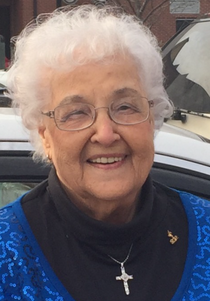 She was born in Orange County, Indiana on August 26th, 1923 and her parents were Elza Phillips and Tlitha Ella Phillips.

Ruby married Cephas Doyle Conrad in September of 1941 and he preceded her in death on July 18th, 1987.

She was also preceded in death by her parents, (1) Brother â€“ William Junior Phillips and (1) Sister â€“ Donna Sue Cooper.

Ruby was member of the Victory Baptist Church, American Legion Auxiliary and was over the kitchen at the French Lick Senior Citizens.  She had worked in the food service industry for many years including the French Lick Sheraton Hotel and Tedâ€™s Drive-In.

She enjoyed making quilts, crocheting, was an avid Bingo player and loved spending time with her family.

Ruby is survived by:

FUNERAL CEREMONY
A Funeral Ceremony will be conducted by Pastor Craig Chestnut on Wednesday, March 7th, 2018 at 11:00 a.m. at the Brosmer-Kemple Chapel in French Lick, Indiana.  Interment will follow in Cuzco Cemetery in Cuzco, Indiana.

In lieu of flowers, donations may be made in memory of Ruby to the Cuzco Cemetery, c/o Brosmer-Kemple Funeral Home, 9640 W. State Rd 56, French Lick, IN 47432

To order memorial trees or send flowers to the family in memory of Ruby C. Conrad, please visit our flower store.