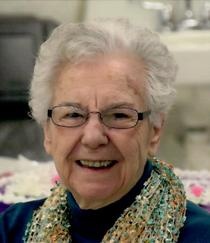 Ruth attended the French Lick High School in French Lick, Indiana. She worked at both the Charlestown Powder Plant and also at the Indianapolis Powder Plant for Crane NSWC. She was a loyal member of the Hillham Church of Christ in Christian Union, the Eastern Star, enjoyed reading her Bible and spoiling her grandchildren.

She is also survived by several Grandchildren, Great-Grandchildren and numerous loving friends and family over the years.

FUNERAL CEREMONY
Funeral Ceremony will be conducted Saturday, September 19th, 2015, at 11:00 a.m. by Mike Grable at the Hillham Church of Christ in Christian Union in Hillham, Indiana. Burial will follow in the Emmons Ridge Cemetery.

To order memorial trees or send flowers to the family in memory of Ruth Ann Buchanan, please visit our flower store.