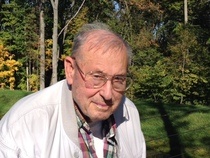 He was born in French Lick, Indiana on June 12th, 1929 to Samuel Frederick and Hazel (Cox) Cox.

He was also preceded in death by his parents, (2) Sisters â€“ Margaret Hobson and Fanny Cox and (1) Brother â€“ Frederick Cox.

Sam graduated from French Lick High School. He was a member of the Bridgeport Masonic Lodge F&AM 162, the Moose Lodge and the IUOE Local 103. Sam will be remembered by his family and friends for his love of the outdoors, his sweet tooth, and his sweet smile. He will be greatly missed.

FUNERAL CEREMONY
Funeral ceremony will be conducted by Doug Finney on Monday, November 2nd, 2015 at 1:00 p.m. at the Brosmer-Kemple Chapel. Interment will follow in the Mount Lebanon Cemetery in French Lick, Indiana.

VISITATION
Friends may call Monday from 11:00 a.m. until the time of service.

To order memorial trees or send flowers to the family in memory of Samuel Hartford Cox, please visit our flower store.