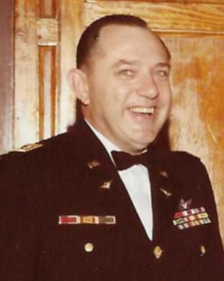 On January 7, 2023, Samuel Elisha Kaiser, passed away at home, surrounded by friends and loving family.

He was Commissioned in the Regular Army as a Second Lieutenant of Field Artillery in 1958, and later transferred to the Army Aviation Branch. He was a Master Army Aviator, both fixed wing and rotary wing rated. After many command assignments and tours of duty, Samuel retired as a Lieutenant Colonel in 1985, after 27 years of active military service. He retired again after 15 more years serving as a civilian contractor testing Army equipment at West Fort Hood, Texas.

In 1956, Samuel married his great love, Patricia Ann "Tracy" Wells, his partner in life for 66 years. After 28 family moves, Sam and Tracy settled in Belton, Texas in 1983.

Samuel was preceded in death by his parents; step-mother - Opal Kaiser; and one brother - Clarence James Kaiser.

Sam and Tracy are parishioners of Saint Luke's Catholic Church in Temple, Texas.

He is a member of the U. S. Army Otter and Caribou Association, the Quiet Birdmen, the Vietnam Helicopter Pilots Association, The Army Aviation Association of America, the Association of the United States Army, the American Legion, Post 133, Temple, TX, and the Sons of the American Revolution. Samuel's pursuit of his interest in genealogy and family history gave him great satisfaction as well as a wealth of family stories.

Graveside services will be held at Wickliffe Cemetery in Wickliffe, Indiana at 11:00 AM on Tuesday, January 17, 2023.