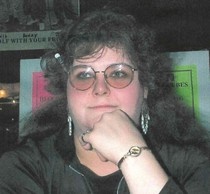 She was born on August 28th, 1961 in Van Nuys, California to William Warren and Carol (Stringer) Warren.

Teresa married Steve Moffatt on May 14th, 2001 and he survives.

Teresa was of the Christian faith, had been employed as a bartender and was one of the first plus size models at the French Lick Hotel.

Teresa is survived by:

CELEBRATION OF LIFE CEREMONY
Celebration of Life Ceremony will be held 5:00 p.m., Sunday, May 20th, 2018 at the American Legion Post 149 Phillips-Grigsby in West Baden Springs, Indiana.

To order memorial trees or send flowers to the family in memory of Teresa A. Moffatt, please visit our flower store.